Iran, opportunities for exchanges and trade relations with Italy 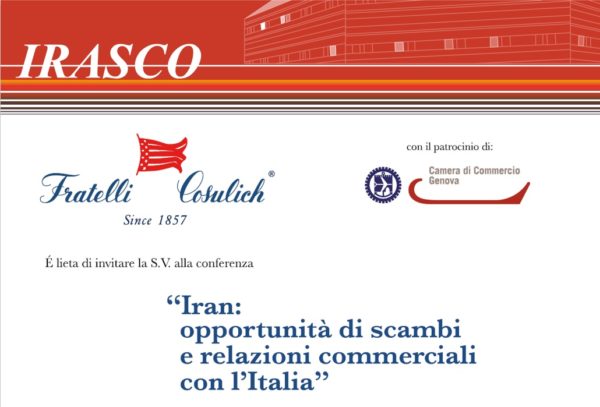 On June 20, 2016, at the Palazzo della Borsa, in Genoa   the company Fratelli Cosulich  has organized the meeting “Iran: opportunities for exchanges and trade relations with Italy”. Together with Naser Bateni the representative of Irisl, the Iranian flag carrier that has big development projects, were present the ambassador of the Islamic Republic of Iran Jahanbakhsh Mozaffari, the President of Confindustria Genova Giuseppe Zampini, Augusto Cosulich, Managing Director of Brothers Cosulich Spa, and Mauro Bolla representing the Iranian Irasco company with headquarters in Genoa since 1994.
The meeting wanted to highlight how the resumption of trade between Iran and Italy, after the July 2015 JCPOA agreement, is urgent in order to restart development in the Middle Eastern country and become a grate trade opportunity for Genoa and Liguria